Is it at all possible you are using your dash cam illegally? How do you use your footage to benefit you? What footage can be used?

These are the questions which identify the reasons for the need of a simple guide towards the rules and regulations of using a dashboard camera.

If installation of a dash cam proves that it is an obstruction to the overall view from the driver, then it is installed illegally as a driver must have a clear view of the road at all times.

Not only can dash cams help to benefit yourself, they can also be used against you. For example, the police are able to request footage if they see fit. In some countries, they have restrictions in place when it comes to having them installed in your car.

There are no current regulations which suggest dash cams invade any sort of privacy, as long as all GDPR rules are followed correctly.

If the vehicle being used is of shared use, for instance through a company, every person must be informed that their current actions whilst driving are being recorded, so that claims of privacy being invaded cannot be made.

Can you record sound on a dash cam?

Specific dash cams are built in with microphones and some have speakers – these ones are able to record audio. In certain cases, it is the audio recorded that has won people support in a case over the actual video footage.

Can you film people with a dash cam?

As long as the dash cam is fitted legally, then it is legal to have it filming at all times during your car journey.

France and Belgium sit in the middle, dash cam use is legal, however, only for private use, meaning footage cannot be posted online.

The laws between personal use of dash cams and company use are very similar and have only 1 difference. That one difference is that use of a dash cam in a company vehicle all users must be informed and all have to accept that it is not an invasion of privacy.

Where should dash cams legally be placed?

Unlike a phone holder or a sat-nav, which don’t have a specific place they must go, a dash cam does – this place is a fixed position behind the rear-view mirror.

Once the dash cam is placed here, it is not blocking the view of the driver to the road ahead.

Can you be prosecuted from dash cam footage?

If the position of the dash cam is not legal and the police or court decides this when under investigation, then the evidence provided through the dash cam will be inadmissible.

This could lead to the driver of the vehicle being fined and losing the court case.

Is the use of a dash cam in the rear window illegal?

A rear view camera attached to the back window is not illegal as long as it does not obstruct the driver whilst reversing.

Benefits of having a dash cam installed

They can show authority that it really wasn’t your fault for why the accident happened.

For a driver who has or does use a dash cam, insurers will most likely reduce your premium as you are seen as safety-minded and don’t mind that your driving can be recorded at all times.

Disadvantages of having a dash cam installed

The position of where the dash cam is installed matters completely. This is because if it is deemed to be in a position which obstructs the driver’s view, then the driver could be fined for up to £1,000 and possibly collect 3 points on their licence.

If the dash cam footage is used in court or by insurers to prove that the accident was not your fault and it is found that the camera is placed in an obstructing position, the case will be dropped immediately as this evidence is now seen as inadmissible.

Do I Need a Battery Discharge Prevention Device for my Dash Cam? 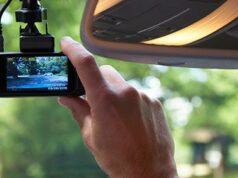 Can a Dash Cam Drain Your Car Battery?

What to do if you scratch your wheels

Are dash cams legal to use in the UK